an excerpt from an article by Jacqueline Novogratz, on the Huffington Post, highlighting some good redesign elements at a Pakistani refugee camp: 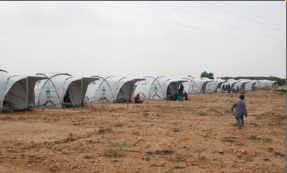 We drive north along the old highway from Karachi to Lahore. The road is uneven; the colorful trucks, as big as buildings, are overstuffed with sugar cane and wheat and even rocks to such a degree that they look unreal. We pass ragged communities of people living in makeshift tents along the roads. That there is any organization at all is extraordinary — in the past four days, 650,000 individuals have left their homes and 100,000 houses have been lost. People were given a day’s warning to evacuate, so most people were able to hold onto their belongings. I’m struck by how little they have even in good times: a roped bed, a few blankets, some pots and pans, a few items of clothing, maybe a cell phone, although I don’t see a single one all day — right now, they are too expensive to use.

We turn down a side road to arrive at a community of 100 tents situated in a circle. I’ve been prepared for the kinds of camps we’ve seen previously: hundreds of tarpaulins lined side by side and row by row with people sitting in their own abodes, rarely mingling. This community, in contrast, has been created on a human scale. The air feels fresh, and there is room for people to feel a greater sense of freedom. The tents, made by Shelter Box (and donated by Rotary Club), are made of nylon, dome-shaped with double layers for insulation and zippered windows and doors. Rotary pays a high price for each — about $250 — but the privacy, coolness and safety from the poisonous snakes that have come out in force communicate a powerful sense of dignity. In some ways, these tents are a step up from the mud and thatched roof homes that were flooded. This plus the distribution of free food twice a day, the provision of clean water and the security of the community make some nervous that people will not want to go home. “We need to help transition people to a more self-sufficient, not less self sufficient state,” says one of the men with us.

The circle formation of the tents seems to promote interaction among these temporary residents. Nearly everyone is outside, cooking, playing or just sitting and watching the world. And people were able to bring their animals, which now constitute almost their only wealth. Most have constructed shelters for their cattle, goats and chickens. Perhaps this feeling of security in knowing at least some wealth is preserved counts more than any other reason for an entirely different feeling in the air.