Here’s another example of visual explanations of law.  Here it is the 2008 book Bound by Law?: Tales from the Public Domain, with Intellectual Property Law visualized in comic book format, from Duke University Press, authored by Keith Aioki, James Boyle, and Jennifer Jenkins.  You can buy it here on Amazon.

via Bound By Law: the “Understanding Comics” of copyright, in a new edition – Boing Boing. 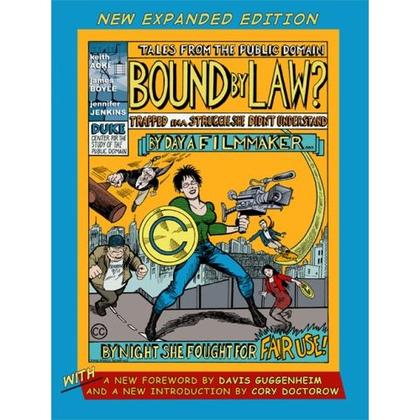 Duke University Press has just released an expanded edition of “Bound By Law”, the comic book by three law profs about copyright, fair use, and documentary film. It includes a wonderful new Introduction by BoingBoing’s own Cory Doctorow and Foreword by Oscar-winning filmmaker Davis Guggenheim, and is freely available under a Creative Commons license.

From Cory’s Introduction: “This is a sensible book about a ridiculous subject. It’s an example of the principle it illustrates: that taking from the culture around us to make new things is what culture is all about, it’s what culture is for. Culture is that which we use to communicate.

“The comic form makes this issue into something less abstract, more concrete, and the Duke Public Domain folks who produced this have not just written a treatise on copyright, they’ve produced a loving tribute to the form of comics.

“It’s a book whose time has come. Read it, share it. Get angry. Do something. Document your world.”

Hi Margaret: I came across this report in my online travels and thought you and others here might find it interesting: it’s called “Justice Framed – Law in Comics and Graphic Novels” – http://ro.uow.edu.au/cgi/viewcontent.cgi?article=1287&context=ltc

PS. Sorry for the double post – but the title above is actually the title for a whole issue of an online Australian law journal! Here’s the link to the table of contents: http://ro.uow.edu.au/ltc/vol16/iss1/