I had written a short piece on the potential rise of crowdsourcing in legal investigations earlier in the year — and following up on that, Stanford Lawyer has asked four different criminal law specialists to weigh in with their thoughts on the topic. You can read their thoughts at this Up For Discussion piece over at Stanford Lawyer. 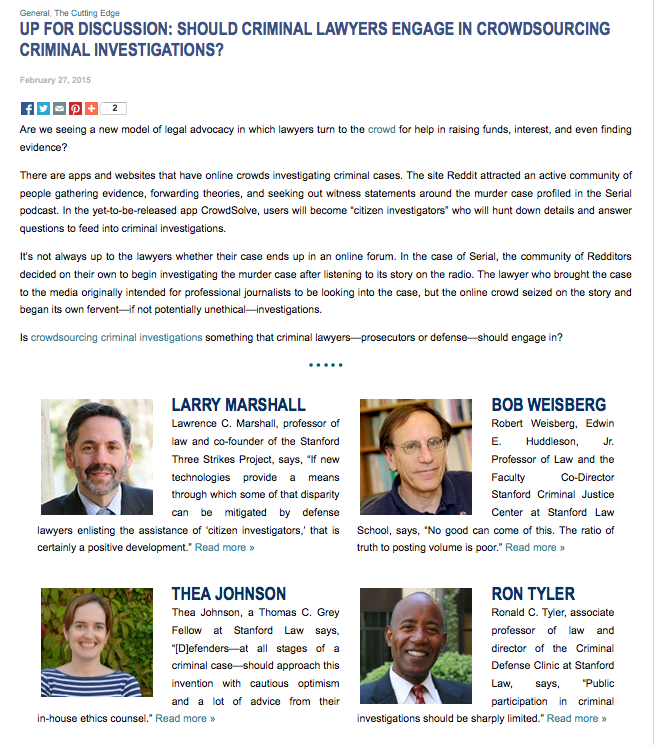 It is fascinating to see the range of responses — from enthusiasm, to cautious optimism, to absolute opposition. Professor Larry Marshall may be the most positive: “the benefit of enlisting as many people as possible in the goal of accurately convicting the guilty and exonerating the innocent far outweighs the costs this practice generates.” The benefit he sees is the ability to throw more (much needed) resources behind the individual caught up in a very well-resourced criminal justice system.

There can be no debate that, in all but the rarest criminal cases, there is a massive asymmetry between the investigative resources and tools available to the police/prosecution and the resources available to the defense. This disparity goes beyond financial resources and access to armies of investigators. Rather, it includes tools such as the prosecution’s ability to compel potential witnesses to testify before a grand jury, to grant immunity and other consideration to witnesses who will aid the prosecution, and to even threaten some non-cooperative witnesses with criminal charges. The adversarial system can not serve its function as a vehicle for truth-finding when one adversary has such dramatic advantages over the other. If new technologies provide a means through which some of that disparity can be mitigated by defense lawyers enlisting the assistance of “citizen investigators,” that is certainly a positive development.

But Professor Robert Weisberg would disagree. He suspects that the kind of information that crowdsourcing will turn up will be useless if not harmful.

If we are speaking of individual criminal cases and are concerned with the system generally, my first instinct is unabashedly Luddite: No good can come of this. The ratio of truth to posting volume is poor. Criminal cases press the most worrisome buttons in the polity: outrage, gossip, prejudice, and posturing. Of course most criminal cases are fairly straightforward on their facts, but it will be the more controversial or factually ambitious or politically or culturally charged ones that will press these buttons the most, and the proper goal of the system to circumscribe and define the relevant facts will be thwarted. And it will raise and then disappoint expectations among those who read postings that reinforce their original perceptions about these cases.

Weisberg isn’t wholly opposed to crowdsourcing — he suggests that criminal defenders may be able to turn to social media to turn up information that may lead to relevant evidence, but they will have to devote substantial time and discretion to weeding through the information to find what is useful.

I highly recommend you read through the four experts’ responses to the crowdsourcing question — they’re quick reads but full of great thoughts about how law & lawyers are going to have to respond when online crowds take increasing interest in how cases proceed through investigations and trials.

Like I mentioned in the earlier piece I wrote, it will be important for legal ethicists to get in front of this issue sooner than later, because it seems there will be increasing numbers of online criminal investigation crowdsourcing that will happen (organized & spontaneous).  It’s not going away, even if it is unethical and harmful to lawyers’ work & citizens’ welfare.

[…] At Open Law Lab there is a post on whether US criminal lawyers should engage in crowdsourcing. […]