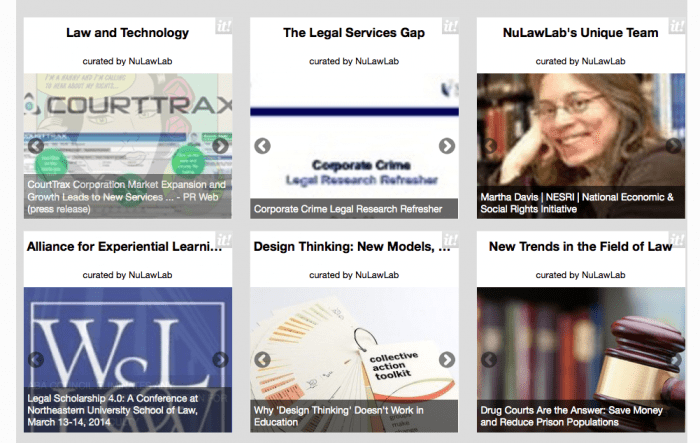 It’s great to see another law school going in the direction of building new generations of legal products, and training a new generation of legal designers & technologists.

Along with Michigan State Law’s ReInvent Law lab, and the Law Without Walls inter-law school program, (not to mention my own upcoming Stanford d.school-law fellowship this year), Northeastern Law is launching the NuLawLab. The Innovation Lab will be guided by an emphasis on design thinking & interdisciplinary work. Dan Jackson & Jules Rochielle Sievert are directing the Lab.

From its press release:

The NuLawLab has convened an advisory board of 12 cross-disciplinary experts, drawn from the fields of law, technology, social media, public health, data visualization, social practice art, civic media, social science, architecture, and higher education. “I joined the lab’s advisory board because I am acutely aware that the current approach to legal education needs a radical rethinking if it is to serve not only its students but also the needs of society,” said Colin S. Diver, former dean of the University of Pennsylvania Law School and president of Reed College. For a list of NuLawLab’s advisory board members, visit http://www.nulawlab.org/index.php/advisory-board/

Some of the projects to be tackled include the following:

With the anticipated passage of the Massachusetts Domestic Workers Bill of Rights this fall, NuLawLab and Northeastern law students will join forces with artists and worker-led coalitions to produce “Project NannyVan,” a public art and advocacy initiative featuring a bright orange roving resource center. Spearheaded by REV-, with partners including NuLawLab, the MIT Center for Civic Media, the National Domestic Workers Alliance, and other advocates and allies nationwide, Project NannyVan aims to provide workers and parents with tools to support the growing national movement for domestic worker justice.

The Alliance for Experiential Learning in Law — a group of more than 160 members affiliated with nearly 100 law schools and legal service providers, working together to ensure that law graduates are ready to practice with a full complement of skills and ethical and social values necessary to serve clients and the public interest, now and in the future.

The Outcomes Assessment Project — a rigorous social science research study that will provide critical insights on how to better integrate experiential education into the law school curriculum. Equally important, it will give the legal academy and profession a more realistic, evidence-based analysis of what is effective in preparing lawyers to quickly mature professionally, resulting in models for how to best allocate resources in the years ahead.

“These pioneering projects lay the foundation for our development of interdisciplinary collaborations generating viable new models for the delivery of legal services to all who need them,” said Dan Jackson, the lab’s first executive director. Jackson is joined in the lab by Jules Rochielle Sievert, its content curator, responsible for researching, developing and managing the lab’s knowledge networks and virtual presence on the web.