I am on the hunt for law games that are rich, fun, and adaptable to many different ways of learning/practicing law. After I started developing my game Law Dojo, I realized how tough it can be to make law games that are fun, move quick, and still pack an educational punch.

In that effort, I’ve been searching around for playable, even addictive, forms of legal education game. And my other question: what does a law game that is scalable?  What would the game pattern or template be, that we could plug in lots of different kinds of legal questions and answers into?  A legal game structure that would allow lots of legal educators, law students, and others author great law games?

I discovered an amazingly rich world of legal & civics game on a Texas state site for legal education. The Texas Law-Related Education group from the Texas State bar has built a wonderful constellation of online games for history, civics, and law.

One especially worth drawing attention to: the evidence law game ‘Objection! Your Honor’.

It is a lightweight but very interactive way to learn & test yourself on the rules of evidence.  The game, which I’m assuming is a flash-based game, uses striking visuals & simple interactions to immerse the user in a courtroom setting.  The player takes on the role of the attorney in a trial.  The opposing counsel is asking questions — and you the player have to figure out (1) should you make an objection, and (2) what the basis of the objection should be.

This is done in an extremely simple but fun way: text descriptions of the case, the witness, and the opposing counsel’s question, overlaid on a vibrant courtroom scene.  The user gets to choose from two options: Object or Don’t Object. 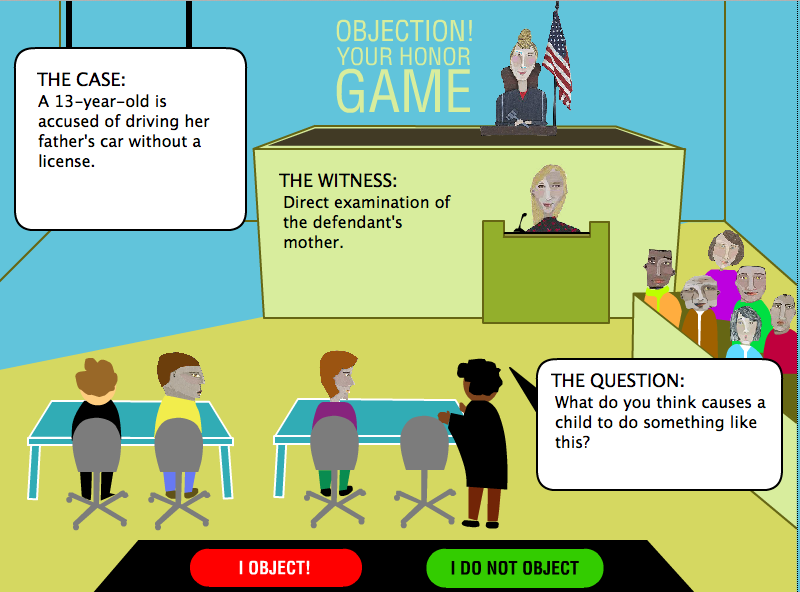 If you decide to press “I Object!” then you’re taken to the second part of the challenge: what of several possible reasons for objecting should you invoke? The game offers you three possible reasons to object.  You read through them (and in so doing, learn the range of possible objections and the rationale of each).  Then you select the most convincing & appropriate reason, taking in the specifics of the case and the witness that you were told earlier. 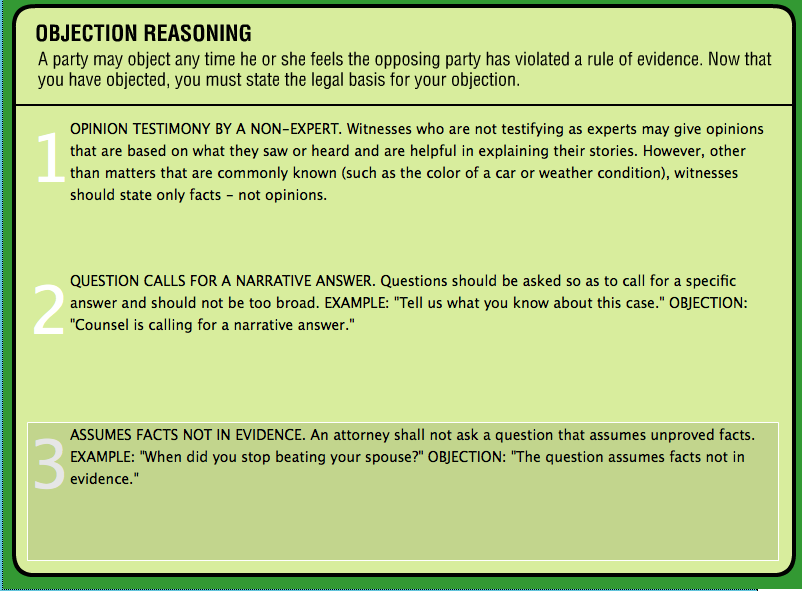 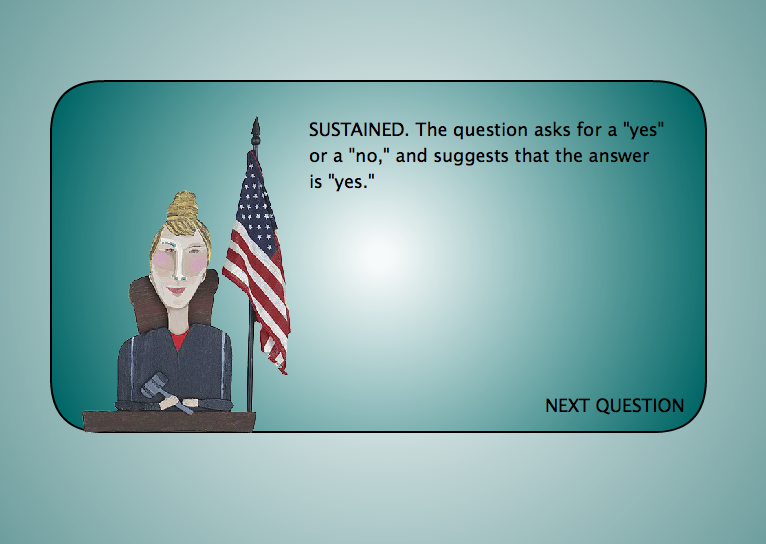 Evidence law is particularly well-suited for this simple, intuitive presentation. Because evidence law takes place inside courtrooms, it’s easy to invoke that context through visuals & a little bit of text.  There’s a stable setting & roles, so then it’s easy to plugin different legal content and display it through this courtroom-witness-lawyer-judge framework.

The games on Texas’ LRE page seem aimed for middle school & high school education environments.  I would love to see this direct but lively game presentation applied to law school level of evidence education.  It would also be interesting (if not more ambitious) to have similar contextualized, role-oriented games to learn other areas of law.  Learn criminal law by having to play the defense attorney who needs to figure out how to defend a client.  Learn torts by playing a plaintiff’s attorney who has to choose whether to take on a case or not. Learn tax law by playing a person trying take as many deductions as possible while staying on the right side of the IRS.

And what’s great here is that the game-creators have not had to invest in a huge, resource-intensive storyline-based game.  Instead, they’ve invoked some of the lively aspects of storyline-based games with images of the courtroom and lawyers, and challenging the player to play the role of the lawyer, but with just short snippets of cases.  It’s much easier to build this style of game out with content — rather than writing whole stories, we could just set up short lines describing the case, relevant context, and possible options.

If you have any thoughts on other types of game structures or patterns that lend itself to scaling to many types of law — while still allowing some storylines, role-playing, contextualizations, etc. — send them along!

Some more visuals of the game: 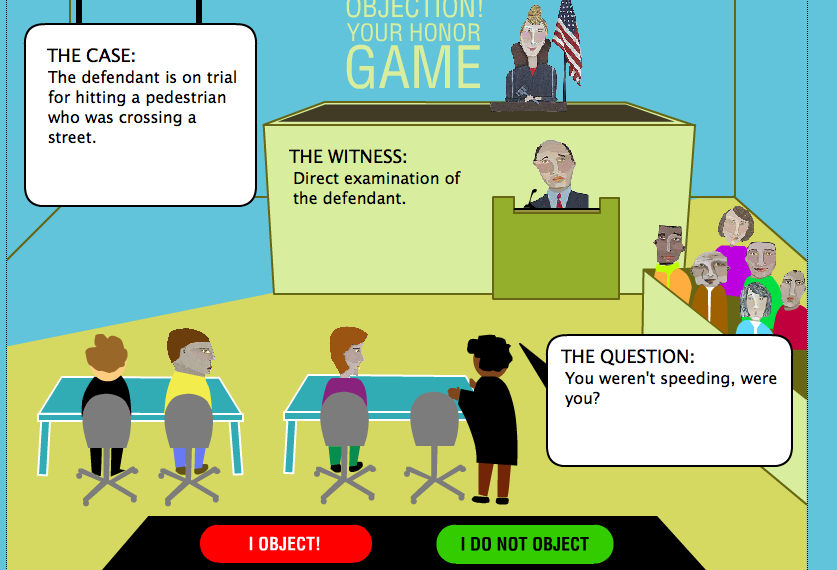 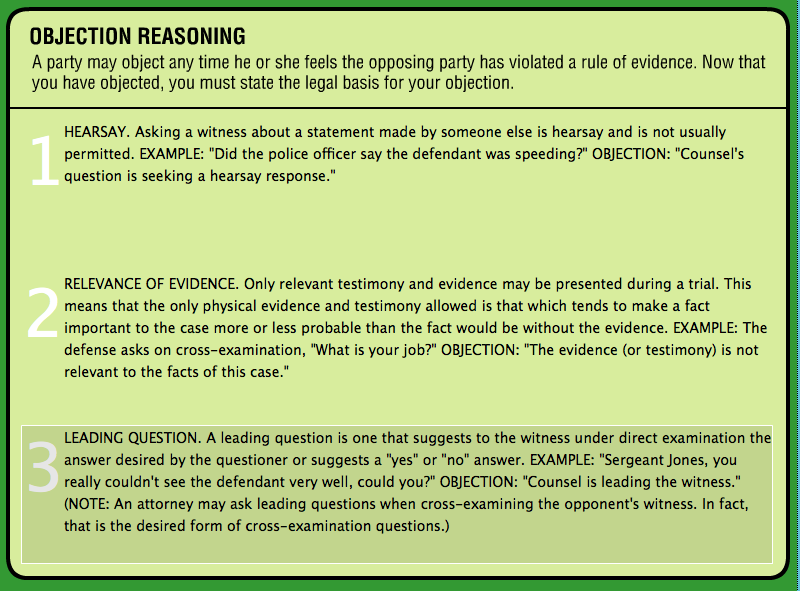 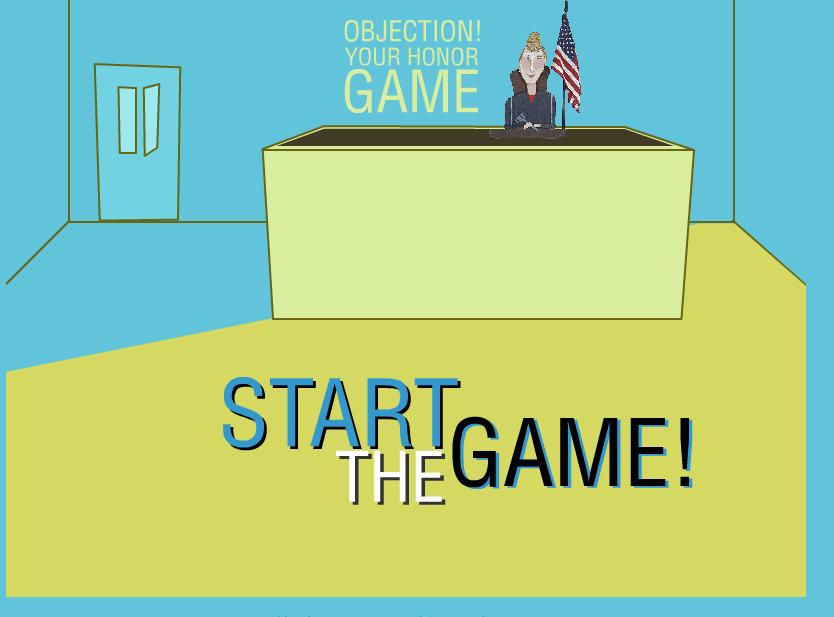 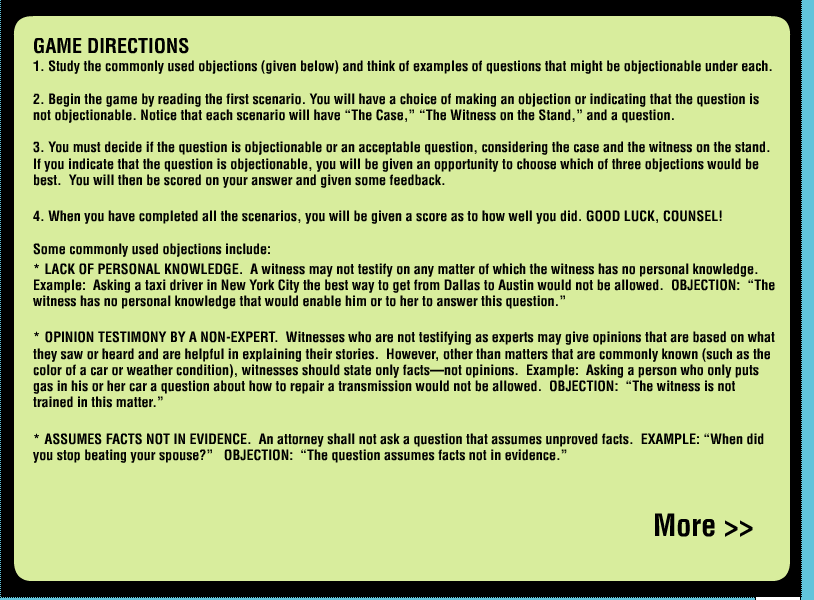 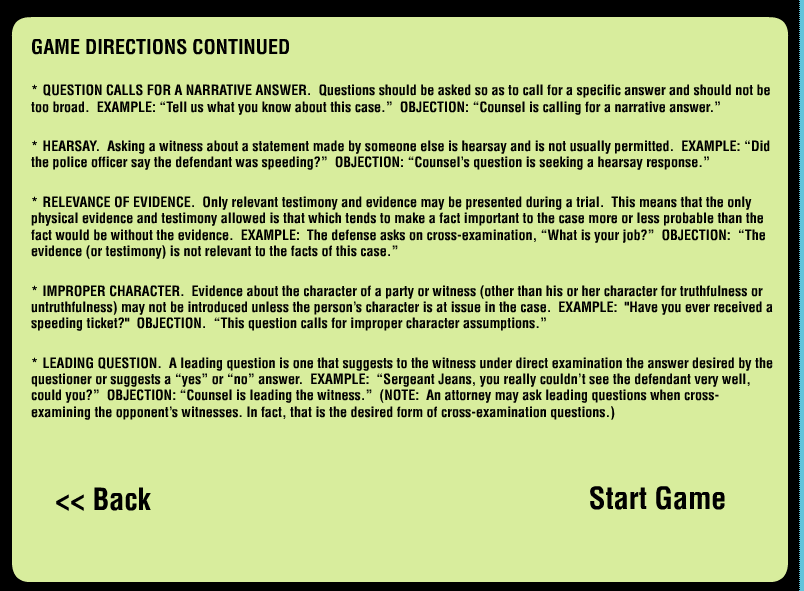 I also have made a law game myself, Law Dojo, that has both mobile apps (on Google Play) (on Apple App Store), and online for limited free play.

CALI Time Trial is the card game that challenges your knowledge of legal history. Draw a card and fit it into the time line based on the information on the card.