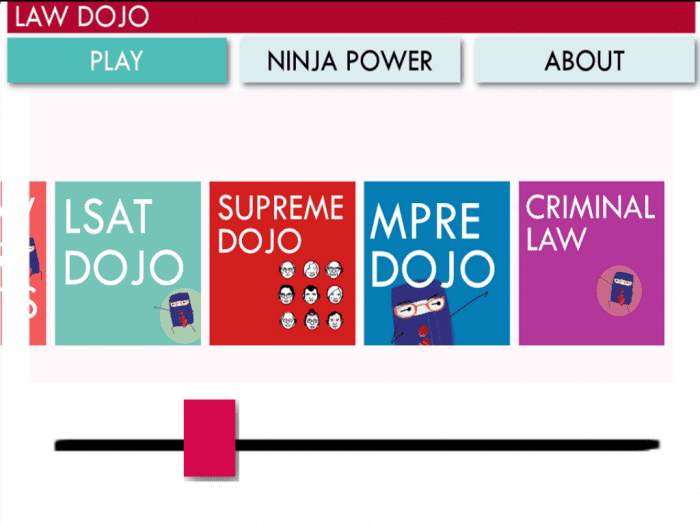 I started programming law games in Summer 2012, when I went from just thinking about my idea of “Law Dojo” and making it real.  Since then, I’ve gotten feedback from so many law students, professors & others, who see the *enormous* potential in using small, quick, smart games to get people empowered with law.

David Johnson, who works at the Tech Law Lab at New York Law School, sent on a proposal he had made with Tanina Rostain, now a professor at Georgetown Law — for the Future Ed Conference, sponsored by New York Law School & Harvard Law.  The proposal, “Seriously Gamifying Legal Learning” picks up many of the themes that had been guiding me as I decided to embark on making games as a law student.
Their proposal in brief:

We propose to create a network of law schools, law professors, practitioners, law students and others to collaborate to develop and distribute interactive, online games and simulations designed to enable legal learning.

The core players in this network would distribute finished games, share information and techniques for game development, distribute authoring systems to enable non-technical authors to inject substantive content into established game mechanics, provide an online learning space in which anyone who wants to learn about law can find both free and paid interactive learning objects, and support a social layer to allow those using the games to discuss them, compete in multi-player contexts, rate particular learning objects, and propose potential enhancements.

I would love to see this network get off the ground!  I have had enormous fun (and challenges) creating my Law Dojo games, and I am excited to see other law students enter into game development and design too.  It is a wonderful way to take control of how they learn & instead of just laboring over outlines, they can build interactive ways to learn in the way they want to learn.  And even better — then share their learning tools with others.  My hope is to see much more creative, responsive, & engaging study tools emerge, beyond the 40 page outline (which very often just dies on the student’s personal computer).

If you are a law student (or not) who are interested in working on legal learning games, please be in touch!

Johnson & Rostain laid out a great handful of possible games that we could be developing.  These patterns serve as a great point to jump off from, and adapt to specific legal consumers (law students, clinicians, trainees, paralegals, and average lay consumers who are trying to get legal tasks done).

Legal Card Games – Everyone knows how to play cards. Our version challenges players to play cards onto labeled target areas (on the screen). Cards can contain factual statements or arguments or citations or anything else. Because virtual cards are discrete objects, the game software can keep track of what has been played and where and provide appropriate feedback. In some versions, the task is merely to sort facts into different categories corresponding to the elements of a cause of action. In other versions, the cards represent different types of arguments that must be fit into a structure representing the logic of a case. In still other versions, the cards represent statements that might or might not be included in a draft legal document, such as a complaint, with the final submission of the document resulting in detailed comments from the teacher/author and, you guessed it, a contingent number of points.

(Micro)Law Practice Simulations – It is easy, with text, to put the player into a “role” with a defined goal such as making a decision on whether to take a case, what advice to give a client, and so forth. There doesn’t have to be one right answer, because the result of a decision can be a description of what happens next – so a game of this type can “teach” any number of things about the nuances, office politics, and accidents the student will eventually encounter in the real world. But some decisions are clearly better than others, and various decisions can produce points of various types (for ethics, client success, etc.) that accumulate over many different encounters with different situations and roles. Once put in role, a player has a strong incentive to draw on resources provided within the game (research materials, opportunities for additional factual investigation, opportunities to consult with virtual mentors and colleagues, etc.) in order to make the best decision. If drawing on resources has an in game “cost” (such as incurring virtual billable hours that may or may not be paid for by the client), even the need to limit the effort put into some kinds of decisions can be taught.

Interactive Computable Diagrams – It is possible to represent the logic of a statute or regulation (and even a judicial opinion)  in the form of an interactive, computable diagram. Particular facts or conclusions or elements of the legal text can be represented by buttons that can be turned on or off to reflect the presence or absence of such a fact in a particular case – arrayed serially on a line to signify the “and” relationship, on parallel lines to reflect “or” and crossing lines that stand for “not” and show which combinations of facts or arguments defeat an otherwise valid inference. These structures can become learning games when they are used as hidden (or visible) scoring mechanisms. For example, the challenge of a particular screen in such a game may be to present a particular set of facts and ask the player to guess the outcome, which is thereafter computed by the diagram and shown to the student. Alternatively, the logic of a case may be shown along with cards representing facts or arguments the player might submit on behalf of a particular party, with the goal being to win the case against a computer or human opponent within the constraint that only a specific number of cards may be played (with the value of particular cards depending, of course, on what situation has been served up and what moves the opponent has made.

Case Files with Augmented Multiple Choice – We need a better name for this. But our last example involves a system for presenting a complex case file, various resources (materials the student will want to learn in order to be good at the game) and the challenge of combining multiple elements into a compound structure that corresponds to a portion of a good answer to a law school exam, or a memorandum in support of a motion to dismiss a case, or whatever. The key to this game mechanic is that the player must choose, for each slot in a multi-slot target area, from all of the elements of a given type that might be used in relationship to any particular “situation” that might be presented. And, indeed, when multiple situations are presented (various proffers of evidence, various combinations of particular claims brought between various parties to a messy dispute), the student/player can choose which ones to take on at any given time (again, voluntarily selected obstacles, like deciding when to attack the dragon.) This type of game is designed to present an arbitrarily complex set of challenges without requiring the teacher/author to evaluate in advance every possible combination of “cards” that might be played together. Instead, the author identifies and assembles valid/good combinations, sets the scoring system to reward them with points by clicking on the appropriate authoring button, and tells the game to take away points for any other, invalid combinations. This discourages guessing and gets away from multiple choice tests that merely require ruling out a finite number of “distractors.” You really have to know the stuff to do well in games of this sort.

Skills Scavenger Hunt –– Not all games that lead to legal learning must be located on a computer screen. We are discussing a proposal to incentivize students to take the initiative to expand their own skills and experiences by awarding points in the context of a continuous “skills scavenger hunt”. Most would agree that students should take advantage of opportunities, while in law school, to develop skills relevant to law practice and to observe and engage with legal institutions and practitioners. We could encourage this by (1) providing an explicit listing of multiple activities, accomplishments and demonstrations that would “count” towards points, and (2) celebrating students who accumulate the most points (with the idea that those accomplishments may be listed on and would add value to their resume’s).

I found these ideas fascinating and would have loved to have them used in at least a few of my law school classes. They are so different from the way I learned in law school – and I wonder whether these alternative approaches would reward different talents. Really interesting. However, with regard to the last proposal – the scavenger hunt – honestly, if the “incentive” of paying off $200k in debt isn’t enough to prod students to learn new skills, I’m not sure what is!

Thanks for the message, Carolyn!
I love how many opportunities there are for building games now — I was able to learn in a summer how to make a proper app-game, and I think there will be even more tools out there soon to make it easier for law students to build their own games.
There is definitely potential for a great project series, which gives students paths to make games that fit their style of learning, and also provides them a ‘teaching’ moment to have to create the legal content for the games themselves. This was one of the best ways for me to learn the law — to have to explain it and present it through games, to an audience.